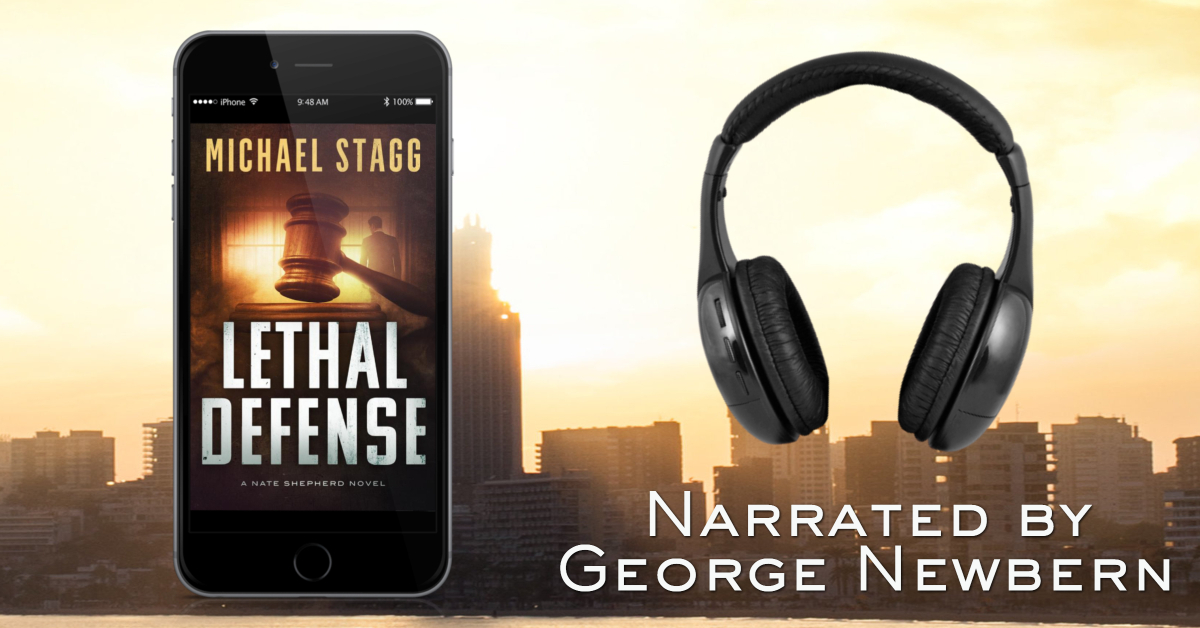 Here’s the final version for the cover of Lethal Defense, Book One, in my new Nate Shepherd Legal Thriller Series. I don’t have an official release date yet, but I do know there will be a preorder. As soon as that link…

The paperback version of Just Plea is now available on Amazon!

I've also had quite a few people ask whether Just Plea will be available on Audible. The answer is yes, but not for a little while yet. I turned in the final audio manuscript to the publisher last week and it typically takes them 3-4 months to produce it. We can expect it to be released in the early fall with fingers crossed for September. The good news is that George Newbern is back to narrate Nate Shepherd so I'm looking forward to his performance!

Finally, thanks to you, the ebook has shot out of the blocks to the best Nate Shepherd launch ever! It's because of you and I couldn't be more grateful. Thank you!

A bloody van. A motive. No alibi.

Nate’s next case is not looking great.

Attorney Nate Shepherd’s newest client stands accused of a fatal hit and run. While Nate doesn’t believe that the CEO of Carrefour’s largest charity would ever smash into a person and flee the scene, a blood-streaked van says otherwise.

A free-wheeling prosecutor is certain that Nate’s client did it and more, that the killing wasn’t an accident at all. With help from old friends and an intriguing new one, Nate uncovers incriminating acts, secret relationships, and a massive motive that has him scrambling for answers.

As the case gets worse, Nate fights to craft a defense. But as trial approaches, one risk grows until it looms over everything else:

Will Nate destroy his client’s life by saving his freedom?

Barring a breakout of world peace, this is the best news ever to make a Monday morning go down easier. This literary juggernaut of yours continues to be so rewarding to follow. Call your next witness sir!

Love the first 4 books that I’ve listened to on audibles! Do you know when this one might be coming out on audible as well?

Can't wait to start this one

Was so excited to see that it is out. Already have mine on kindle and starting to read!🤩🤩

Ten days away! Just Plea, Book Five in the Nate Shepherd Legal Thriller Series comes out May 23rd. Did you grab your preorder?

Will it be released on audible the same day? I came across Lethal Defense about a month ago when I signed up and just finished False Oath today. Amazing series, it has made my 2.5 hour commute to work 5 days a week much more enjoyable and looking forward to the next one!

False Oath does represent! If someone is fairly well versed in reading legal thrillers, I believe it becomes obvious that the best storytellers are active or former judges and lawyers. That is surely the case here. When Michael Stagg gave up the law to write full time, the courtroom lost a most articulate and talented attorney. However the bright side is that the bar's loss is our gain as devoted readers of the genre. His 5th book is out on the shelves but as an audio book addict I'm holding out for that as George Newbern does a stellar job not often heard. He is in the same rarified air as Dennis Boutsikaris, Edward Herrmann, and Ed Sala. As one reads through his first 4 books, it is good to enjoy the familiarity that comes with taking them in order however they are perfectly fine as stand-alone enjoyment. The twists and turns towards the end are very well crafted and the author ties up loose ends to my satisfaction anyway. Michael Stagg is an excellent legal wordsmith and I highly recommend his offerings.

Just finished a rewatch of Ozark to get ready for the new season. I highly recommend the rewatch. www.youtube.com/watch?v=SB3xj2BKgHs ... See MoreSee Less